She is Lady Nafisah, the daughter of our masters al-Hasan al-Anwar ibn Zayd al-Ablaj, the son of al-Hasan ibn Ali, the son of Abu Taleb (may Allah be pleased with them all).

Although her mother was a slave while her siblings’ mother was Umm Salama, Zaynab the daughter of al-Hasan, the son of al-Hasan, the son of Ali (may Allah be pleased with them), this does not by any means discredit her. Hajar, Prophet Ibrahim’s slave bore him Isma’il (peace be upon him) from whose descendants came Mohammed ibn Abdullah, the best of mankindﷺ. The Prophetﷺ himself had a child, Ibrahim (peace be upon him), from his slave Mariah the Copt.

Lady Nafisah (may Allah be pleased with her) was born in Mecca al-Mukaramma in 145 AH.

She memorized the Qur’an at a tender age and devoted her interest to its sciences. She grew up in al-Medina al-Munawarra after her father, al-Hasan al-Anwar, moved there along with the rest of the family. The caliph, Abu Ja’far al-Mansur, appointed her father as the governor of Medina. She was always to be found at the Prophet’s mosque. Lady Nafisah performed pilgrimage thirty times, walking all the way on most of the journeys. Weeping, she would hang on to the curtains of the Ka’ba and say,

“O my Lord and Master! Give me the pleasure and joy of Your satisfaction. Do not cause anything to happen that would distract me from you.”

Lady Nafisah married Is-haq al-Mu’taman the son of Ja’far al-Sadiq. She bore him two children, al-Qasem and Umm Kulthoum, both of who died after their mother and were buried at al-Baqie’.

The people of Medina trusted the hadiths (Prophetic reports) she narrated and her knowledge of the authenticity of their chains of transmissions. As soon as she learned of the illness of one of her regular visitors, the pious Bishr ibn al-Harith who was known as al-Hafy, fell ill she went to visit him. When she was at his house, Imam Ahmed ibn Hanbal called for a visit. He looked at Lady Nafisah and asked Bishr,

“This is Nafisah,” Bishr said. “She came to see me when she heard of my illness.”

Imam Ahmed said, “Ask her to pray for us.’

Bishr told her, “Pray for us.”

So she said, “O Allah! Bishr ibn al-Harith and Ahmed ibn Hanbal ask for your protection from hell-fire, so protect them from it O You Who are the Most Merciful.”

The land of Egypt was honored when Lady Nafisah chose to reside in it; she found a safe haven in Egypt and she enjoyed the love and respect of the people. She came to Egypt in 193 AH with her husband Is-haq al-Mu’taman and her father al-Hasan ibn Zayd after they performed pilgrimage and went to Palestine to visit al-Masjid al-Aqsa. They stayed in Palestine for some time visiting the sacred monuments which were the scene of the Prophet’s journey of al-Isra’ and Miraj. In the mosque of Ibrahim, Lady Nafisah was overcome with a desire to visit Egypt because she knew that Egypt was a sanctuary to all of those seeking refuge from calamities. The people of Egypt welcomed her with great joy and reverence. Wherever she went, she was met with droves of people—from the countryside and Upper Egypt, Bedouins and city dwellers—all welcoming her as soon as they learned of her arrival. She would only see hands raised up in prayer and glorification as if the sky were raining stars. Lady Nafisah delighted in the kindness of the Egyptian people, their loyalty and loved the country and everything in it.

When she first arrived, Lady Nafisah resided in the house of the master of merchants, Jamal ul-Deen al-Jasas where she remained living with his family for a few months. She later went to live at a place called the house of Umm Hani on the outskirts of the city of al-Askar.

When Imam al-Shafi’i passed away in 204 AH, his body was carried to her house where she prayed upon him the funeral prayer behind imam Abu Ya’coub al-Buwaysali. She supplicated Allah for him and testified that he used to perform ablution well. After al-Shafi’i’s death, Lady Nafisah started to prepare to meet her Lord. She dug her own grave in her room in her house in Darb al-Siba’ which the governor, Abdullah ibn al-Sirri ibn al-Hakam of Egypt had gifted her. Her house later became her shrine and present mosque. She used to pray inside her grave and completed the Qur’an tens of times in it, seeking its blessings and intercession [before her Lord] and the satisfaction of Allah the Almighty.

Of Lady Nafisah’s final days, her paternal niece Zaynab, who was her companion, said, “When Lady Nafisah started to feel the pains of her illness on the first day of the month of Rajab, she wrote a letter to her husband Is-haq who was in al-Medina al-Munawarra at the time. She asked him to come because she felt her end drawing near. Her illness continued until the first Friday of the month of Ramadan. At this time she was overwhelmed with pain while fasting. Doctors were summoned and they advised her to break her fast to preserve her strength and overcome her weakness and illness. Astounded, she said,

“How strange! I have been asking Allah, the High and Mighty, for 30 years to seize my soul while I am fasting. Now [you ask me] to break my fast?! Allah forbid!”

She then recited the following verse,

Take my doctor away from me,

Leave me with my Beloved.

The doctors departed, amazed at the strength and steadfastness of her faith; they asked her to supplicate Allah for them which she did with the best supplications.

On Friday 15th Ramadan 208 AH, she died while reading the verse: ‘They shall have the abode of peace with their Lord’ from the Qur’anic chapter ‘al-An’am’.

Her husband arrived in Egypt on the day of her death. He prepared a coffin for her to transport her to al-Baq’ie for burial where her grandfather is buried. The people of Egypt entreated him to bury her in Egypt but he refused. They went en masse to the governor of Egypt Abdullah ibn al-Sirri and implored him to convince Is-haq to bury Lady Nafisah in Egypt, especially since she had dug her grave with her own hands in her house.

The governor told Is-haq, “I beseech you by Allah! Do not deprive us from seeing her grave. Whenever we were afflicted with a calamity during her lifetime, we would come to her house and ask her to pray for us and no sooner had she finished her supplications than Allah would lift the calamities that had befallen us. So let her remain in our land so that whenever we are afflicted we would come to her grave and ask Allah to relieve our troubles.”

Her husband refused the governor’s request and insisted on burying her in al-Baq’ie. So the people collected a large sum of money, gave it to Is-haq and asked him to stay but, to their great disappointment, he refused.  They left the sum of money in his house and when they returned the next day, they were surprised to find that he had changed his mind. He returned their money and agreed to bury Lady Nafisah in Egypt. When they asked him about his change of mind, he said,

“I saw the Messenger of Allahﷺ in my dream and he told me, “O Is-haq! Give them back their money and bury her in Egypt.”

Is-haq returned the money to the people and buried her in Egypt whereupon the people rejoiced and started glorifying Allah.

For a second detailed biography: 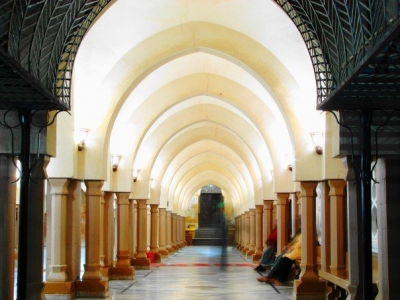 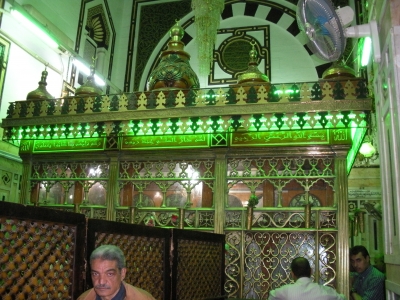