He is Ahmed Ibn Mohammed Ibn Abdul Kareem Ibn ‘Ata’Allah and his nickname is Taj ul-Deen. He was born and lived in Alexandria until he left the city for Cairo after the death of his sheikh, Abu al-Abbas al-Mursi in 686 AH. He was both influential in exoteric sciences and esoteric gnosis and an authority in Qur’anic exegesis, hadiths (Prophetic reports), and usul (fundamentals of Islamic legal theory). For twelve years, he was the disciple of al-Mursi who instructed him on the Shadhili tariqa (order). He is considered one of the of the most prominent sufi masters in the seventh century AH.

Ibn ‘Ata’Allah was initially hostile towards sufism and objected to al-Mursi’s teachings. And since his goal was to pursue truth, when he met and heard Abu al-Abbas al-Mursi, he could not but glean the truth and took al-Mursi as his sheikh and guide.  It was Ibn ‘Ata’Allah who compiled the aphorisms of al-Shadhili and his student Abu Abbas al-Mursi and preserved their legacy. He was also an influential advocate for the Shadhili tariqa.

The chains of all of the Shadhili tariqas go back to Abu al-Abbas al-Mursi and to Ya’qut al-Arishiy, al-Mursi’s student. His works include al-Hikam al-‘Ata`iyyah, one of the gems of sufi prose. The book is replete with symbols and summarizes his methodology; it is written in dialogue form and addressed to the mawrid (aspirant) on the path of his spiritual journey. His others books include al-Munajah al-‘Ata`iyyah considered one of the best in sufi literature; al-Tanwir fi Isqat al-Tadbir a book on communicating with Allah through meditation;  Lata`if al-Minan fi Manaqeb al-Sheikh Abu al-Abbas al-Mursi wa Sheikhuhu al-Shadhili Abu al-Hasan which comprise their biographies, characteristics, adherents, and stations; while Taj al-‘Arous al-Hawy li Tahdhib al-Nufus comprises sufi exhortations. He composed many other books in which he distinguished himself as a master and teacher. In his books, he directed his guidance to the murids and those seeking to walk the spiritual path. He said,

If you are confused over two matters, follow what you think is more important for the self for nothing is important with the self except truth; you must not fall into despair over the loss of anything.

Do not rely on the existence of anything for whoever finds what he looks for, relies on it and whoever loses it, is saddened by its loss. He therefore demonstrates his servility to that whose existence pleases him and that whose loss saddens him.

Ibn Ata’Allah al-Sakandary was one of the active scholars who are the inheritors of prophets and messengers and who performed karamat (miracles of divine favor). A karama is an event contravening natural laws which appear at the hands of whoever Allah wills from among His servants as an honor and glad tidings to the wali (friend of Allah). Allah says:

For them are good tidings in the worldly life and in the Hereafter.

Allah did not merely ascribe the glad tidings to their worldly life but made it perpetual as long as there is life in this world—during their life or after their death. Moreover, Allah makes such a karamat manifest to whoever He wills from among His servants by way of making them steadfast and showing His favor upon them. How excellent are the words of al-Busari who said,

Karamat from [walis] are miracles,

Attained by those who are granted the gift of being friends of Allah.

It has been reported through multiple chains of transmission that Sheikh Kamal al-Humam visited the grave of Ibn Ata’Allah and recited Surat Hud. When he reached the verse, ‘And among them will be the wretched and the prosperous’, al-Kamal heard a loud voice emanating from the grave telling him,  “O Kamal! There is not a wretched one among us.” Ibn Ata’Allah then counseled al-Kamal to be buried next to his grave.

Opposite his maqam and mosque are buried Sayyidina ibn Abi Jamra, Sayyidina ibn Sayyid an-Naas and the khalwa (not maqam) of Sayyida Nafisa. 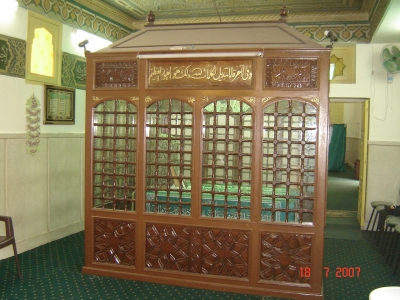 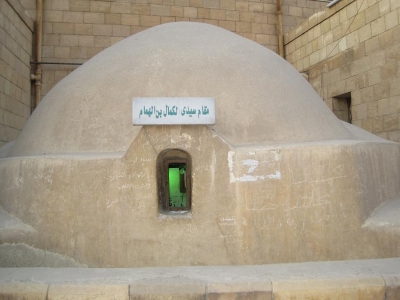