He is Mohammed Ibn Idris al-Shafi’i. He shares the Prophet’s lineage at the level of Abdul Manaf. His mother is the Fatima Bint Abdullah al-Azdiya from the Azdi tribe of which the Prophet said, “al-Azdi (tribe) is the lion of Allah on earth; people would like to trod on them but Allah only wants to elevate them. There will come a time when it will be said, “I wish I were an Azdi and I wish my mother were an Azdi.”

Imam al-Shafi’i was born in Gaza in 150 AH, the year of Abu Hanifa’s death, may Allah be pleased with him. al-Shafi’i’s mother took him to Mecca al-Mukaramma when he was two years old and raised him there and where he studied under the best of scholars. He later went to al-Medina al-Munawarra where he became Imam Malik’s disciple. He committed Malik’s al-Muwatta’ to memory at the age of thirteen; a feat that impressed Imam Malik who told him, “Be conscious of Allah for you will become an important person.” al-Shafi’i moved to Yemen when his uncle was appointed its chief judge and where he reached fame. He later went to Iraq where he studied seriously. In Iraq, he disseminated knowledge and hadiths (Prophetic  reports), upheld the sunnah, and issued legal edicts. Many scholars abandoned the schools of jurisprudence they followed and followed al-Shafi’i’s school. He went to Egypt at the end of 119 AH where he composed new books. In Egypt, people flocked to attend his study circles. al-Rabie’ Ibn Suleiman said, “I have seen seven hundred riding camels tethered to al-Shafi’i’s door , belonging to those who came to hear him exposit his writings.”

In spite of this he said,

“Sound discourse is my methodology.”

“I pray that Allah manifests truth through whoever I engage with in debate.”

“Whoever wishes to [be saved in the Here-after] is to be sincere in seeking knowledge.”

“He whose piety does not accord him respect, is without respect.”

“When scholars are mentioned, Malik is the star. No one has ever done me a greater favor than Malik Ibn Anas.”

“No scholar touches an inkwell with his hand, save that he owes a debt to al-Shafi’i.”

In this manner, the four imams of the Islamic community, were the epitome of  amity, tolerance, and rejection of fanaticism. It was reported that when Imam al-Shafi’i visited the grave of  the great scholar Abu Hanifa al-Nu’man, in Baghdad, he prayed the morning prayer along with his disciples next to the grave. al-Shafi’i did not make qunut (the invocations made after standing up from bowing of the second cycle of prayer), which is a core element in his school of jurisprudence. When his students asked him whether he had changed his opinion, he said, “No, but I did this out of reverence for the methodology of the one before whom we stand” i.e. Imam Abu Hanifa al-Nu’man.

Imam al-Shafi’i  stayed in Egypt for four years and a few months during which time he established and spread the opinion of his school of jurisprudence. He was greatly esteemed by the Egyptians. The number of his students increased and the lessons he held and the disciplines he taught were many. After praying the dawn prayer, al-Shafi’i would sit in his study circle to teach the Qur’an. At sunrise, the students of  the Qur’an would leave and be replaced by the students of hadith who would inquire about the interpretation and meaning of the hadiths. After the sun would rise high in the sky, the study session would center on discussion and debates. By forenoon, they would leave and be replaced by the students of Arabic, prosody, grammar, and poetry. Their study session would continue until noon.

al-Shafi’i, may Allah be pleased with him, died on the eve of Friday after sunset 204 AH.

Imam al-Shafi’i’s shrine is considered the biggest in Egypt and has the oldest wooden dome. Its area is approximately 400 m and its height is 29 m. Constructed on the dome is a 2 ½ m long ship symbolizing his expansive knowledge. It also depicts him as the life boat for those who seek to increase their knowledge. 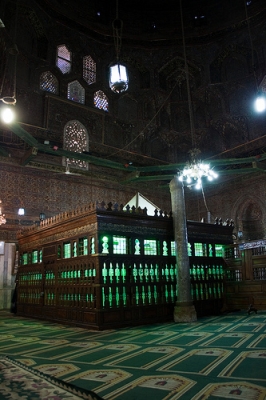 Behind the screen is the tomb of the founder of one of Sunni Islam's four madhabs (schools of law). Shafi'ism is prevalent in Egypt, Malayia, and Indonesia. While we were there, two busloads of Malaysians came through. 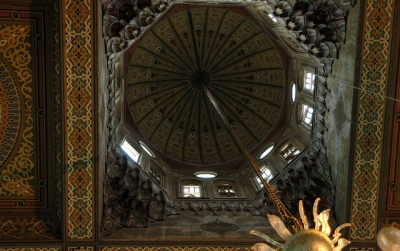 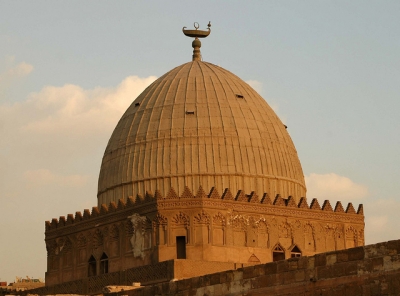