He is the Qutb Abu al-Aynanyn Ibrahim al-Dasuqi bin Abdul Azeez Abu al-Majd bin Quraysh, whose lineage goes back to Imam al-Husayn the grandson of the Emissary of Godﷺ. He (may God be pleased with him) was born in the year 633 AH in the town of Dasuq and was raised in an Egyptian environment of piety and righteousness where he committed himself to memorization of the Noble Qur’an and the Islamic sciences especially to Usul al-Fiqh (principles of the jurisprudence) according to the school of Imam al-Shafi’i.

He (may God be pleased with him) was known as a crafty potter insisting that his disciples take up a handicraft as well to be self-sufficient. He used to say:

“Whoever abandons the sacred law and esoteric sciences and ignores hygienic practices is not from amongst my sons even if I conceived him. And whoever is an aspirant adhering to the sacred law, esoteric sciences, self-sufficiency, asceticism, and is free from greed then he is my son even he be from the farthest lands.”

For this reason the Imam al-Dasuqi rebutted the claims of those that said they from his disciples when clearly betraying the sacred law and preferring the world over their religion and God. Whomsoever upholds the sacred law and acts according to the Noble book and the Sunnah then he is from the special sons of Sayyid Ibrahim.

The crucial criteria to be and considered a follower of the Qutb al-Dasuqi is adhering to these universal principles without submerging the self into worldly gains of money and family at the expense of fulfilling God’s commands. Regarding those who make false claims about following him, Sayyid Ibrahim says “God has discounted all those who have sought fame for himself by exploiting our path and thus belittling us.”

His impressive spiritual attraction reached such peaks that the Sultan Baybars decided to make him the head Shaykh of Islam in Egypt which he accepted. He fulfilled this responsibility nevertheless refusing any personal benefits, distributing his salary for example to the poor. Likewise, the Sultan commissioned the building of a zawiya (sufi lodge) for the Shaykh to meet with his students and teach them the matters and principles of their religion. al-Dasuqi continued working in the position of Shaykh al-Islam until the Sultan Baybars passed away so he excused himself from the position to be more available for his students.

al-Dusooqy was a bachelor his whole life and dedicated all his time to Sufism, worship and meditation. He (may God be pleased with him) excelled in several languages besides Arabic including Syriac and Hebrew. He wrote many books and essays in Syriac and he left behind for us a fortune of works in jurisprudence, Islamic creed and Quranic exegesis. The most popular of them is “The book of Jewels” or “The Jewel of al-Dusooqy.” Orientalist scholars moved some of his works to Germany and one of his preserved poems is on display at the British Museum in London.

al-Dasuqi was a contemporary of Sayyid al-Badawy (may God be pleased with both of them). What bound them together was the divine unbreakable rope of assistance. This is demonstrated in his saying his thousands of attentive students surrounding him when he said: “God’s blessings upon us has been completed today. We are all followers of Sayyid al-Badawy.” al-Dasuqi’s spiritual (may God be pleased with him) approach is described in his advice below:

And from his sayings that reveal his lofty secrets are:

*”The aspirant is never perfected until he loves all people, has empathy for them and covers their faults. So if one claims perfection and is not as we have described here than know that he is a liar.”

*”It is incumbent on the aspirant to learn the knowledge that would make him steady in fulfilling obligatory and voluntary acts. He should not concern himself with rhetoric since this will distract him from his true goal. He should go as far as digging deep to discover the inner dimensions of the actions of the pious predecessors while being constant in dhikr.”

When it was once said to him that “[what do you have to say about] a people who were found frolicking about” he said (may God be pleased with him) “may God have mercy on Imam Junayd who was asked the same question and his response was (may God be pleased with him) “leave them be with God frolicking and do not forbid anything except outright disobedience that contradicts the sacred law. There is no penalty on them since in their own way they are finding it therapeutic. If you tasted what they are tasting, you would immediately excuse their loudness and their passions.””

He (may God be pleased with him) once wrote a message to one of his admirers saying:

“Peace upon the lovers of God that are wrapped in the expansive shade of mercy. Truly, the tree of the hearts when shaken will release a beautiful smell that nurtures the soul. All who do not have a “stuffy nose” will inhale this scent and will attain illumination and knowledge of different sorts that will transform into meaningful knowledge for some and for others extraneous knowledge. For those who are transformed, it is as if they already knew this knowledge and for the others it is strange and impenetrable. How wonderful that scent is.”

He (may God be pleased with him) passed away in the year 676 AH in the same room that he used to worship in. He is buried next to his brother and successor, Musa Abu al-Umran. 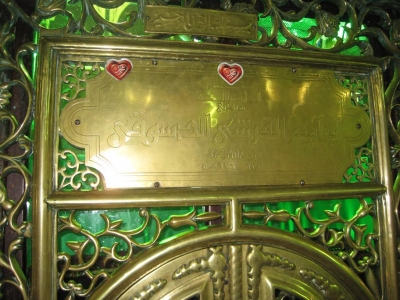 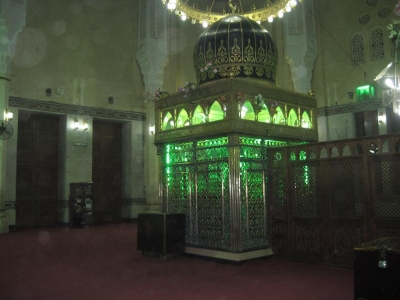 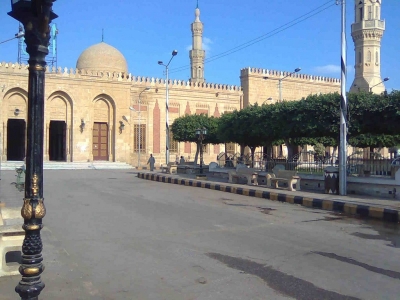