He is the Sayid Yusuf bin Abd Alraheem bin Yusuf bin Isa the ascetic. He is the Shereef the Husayni and his surname is Abu al-Hajaj with the added al-Luxory since Luxor was his final location of settlement.

He was born in 550 AH in Baghdad in a well to do family who’s members were very pious. His father held a leading position in the capital city of the Muslim Empire, Baghdad. When his father passed he left nothing of material worth. Therefore he picked up the skill of spinning thread to make ends meet. Nevertheless this did not busy him from being a serious student of knowledge. His time in Baghdad was a great factor in his favor since some of the giants of Muslim scholarship and spirituality were his contemporaries. From them are Abdal-Qadir al-Jilani, Abu al-Najeeb al-Suhrawardi and Ahmed Rifai’i.

Abu al-Hajaj joined the Nithameyya where he became a close colleague with Shihabaldeen al-Suhrawardi. He would be present at the circles of knowledge and dhikr that the great sufis of his time assembled.

Abu al-Hajaj was very serious, passionate and patient when it came to reading and research. Indeed he made the scarab beetle one of his examples to learn from. He narrated:

“One night when I was a young man and I was up late in the night writing, I saw the scarab beetle attempting to climb up my lantern so as to get near to the source of light. He continued sliding down the glass casing because of its smooth texture. I counted the amount of times he fell that night to be 700 falls. Nevertheless he did not back down from his goal. I then exited my room to pray the morning prayers and upon my return I found him sitting on top of the lantern victorious. He was bathing in the light and his eyes were gleaming with hope. He was one of Gods troops sent to me.”

He then started giving lessons and preaching in Baghdad where many Iraqis gathered around him to listen. He was unique in his ability to transmit his knowledge to the listeners in a style that their minds easily absorbed.

In his late 30’s he traveled with his four children, one extended family member and other companions to Mecca. There one of his sons passed away and he buried him in the burial grounds of Mecca called Al Muala. Sheikh Abdal-Mu’nim al-Ashqar, a local scholar of Mecca, got to know Abu al-Hajaj. Eventually they became so close that al-Ashqar gave his three daughters to al-Hajaj’s sons in marriage. al-Hajaj was offered to marry one of his daughter but he excused himself saying: “I wouldn’t get married after the mother of my children while I am not in need of women.”

He remained in Mecca for a year getting to know its noble inhabitants some who were his distant relatives. They are the ones who encouraged him to go to Egypt. At this time, Egypt was becoming known as a fertile ground for sufis because of its calmness and stability which already attracted the sufis of Morocco.

Abu al-Hajaj departed Mecca to arrive in Medina and visit the Prophetﷺ and receive hisﷺ permission. Subsequently, he headed for Egypt with a group of Arabs from the tribes of Juhayna and Aseer. He describes his journey to Egypt saying:

“We arrived in the Eastern Delta and settled there getting to know our cousins. When God permitted, we travelled toward the shores of the Nile in the direction of the land that God had destined for us. My children and I then headed south until we reached Asyut then onto Jirja then to Qoos then finally to Luxorayn. My three children, I and some relatives who were with us settled around the outskirts of the ancient temples. This was close to the end of the reign of Salahudeen in Egypt.”

The city of Luxor that Abu al-Hajaj settled in was an ancient Pharaonic city whose original name was “Holy Egypt” or Thebes. The Ptolemic period knew it as “The High City.” The Copts named it “His Pope” or “My Pope.” After it was known both as al-Luxorayn or “the two palaces” as well as Tarya Kastra meaning the three fortified palaces. It’s name among the laymen is Luxor.

In no time, the news of Abu al-Hajaj’s great character and piety spread amongst the people until it reached the Sultan of Egypt, al-‘Aziz Imad-adeen Abi al-Fath Uthman bin Salahudeen al-Ayubi. He was a kind and generous ruler who treated his subjects well and respectfully and was heedful toward the gnostics of his time. He sent a messenger to Abu al-Hajaj and when he came to the Sultan, the Sultan was amazed by his strong personality, depth of knowledge and piety so he gave him the responsibility of over looking the Diwan but Abu al-Hajaj did not remain long in this position. When he quit, he went to Alexandria, a gathering point for the greatest scholars and ascetics from the east and west. There he met the great Sheikh and ascetic Abdal-Razaq al-Jazuli whose credited with the honor of spreading the Sufi order known as al-Madineyya. It is the first Sufi order introduced to Alexandria preceding both the Rifai’yya and Shadhiliyya orders. He remained in Alexandria until he became a sincere student and lover of the order before he returned to Luxor. On his way, he stopped in Qoos where he met it’s Pole, Sayyid Abdal-Raheem al-Qina’i.

Abu al-Hajaj settled in Luxor dedicating his time fully to preaching and calling people to the Truth. His assemblies were filled with scholars and important figures. From his remaining scholastic achievements is his piece on “Knowledge of Monotheism.” It is divided into 99 chapters and consists of 1,373 lines of poetry.

He passed in the year 642 AH. It is worth noting that his tomb is in a place that worshipped the Divine for several ages. There remains the temple of Amun, the Pharaoh and the Coptic monks who turned part of the temple to a monastery after Islamization of Luxor. Abu al-Hajaj single-handedly brought the society of Luxor from a life of rigidity and staleness to a life of activity striving for matters in this world and the next.

His way in Sufism was to hold fast to the Qur’an and Sunnah. From his teachings is that the truthful aspirant does not every entertain ideas regarding the essence of God. 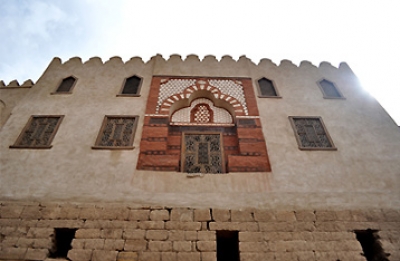 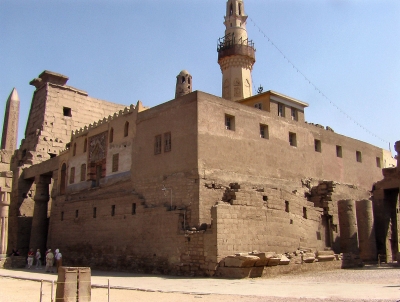 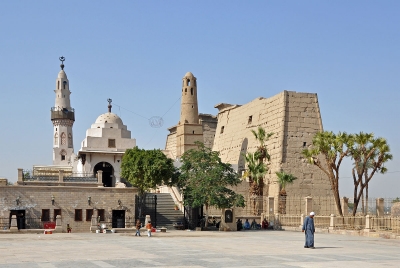 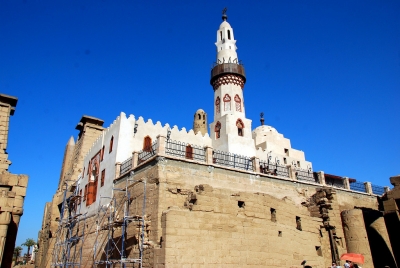 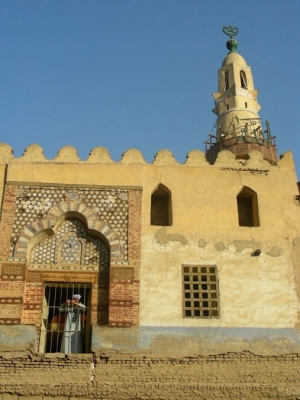